Behave Yourselves! The Crimes Of Tim Winter And The ‘New Atheists’ Compared

Posted on May 7, 2013 by thesultansjester 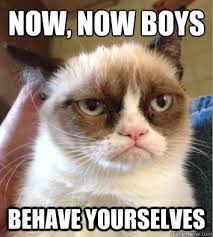 Stalwart of traditional Islam and Cambridge University professor Tim Winter, has recently come under a barrage of criticism for comments he made about the undesirability of homosexuality many years ago before taking up his post. Liberals and Gay rights campaigners have expressed horror that a man with such views could a) express them b) be a part of public life.

It appears criticising homosexual ‘behaviour’ is off-limits. So are there other ‘behaviours’ criticising which is off limits? Is Tim Winter ignorant of something the rest of us know?

Religion is a behaviour: it may have an evolutionary/genetic component if you believe that stuff or it may be environmentally determined in some other way (like conditioning) or it may be innate and true, as is our claim as religious people.

Homosexuality is also a behaviour: it may have an evolutionary/genetic component according to some materialistically minded people or it may be environmentally determined according to people of a more behaviourist bent or it may be innate and an essential component of someone’s personhood, as is the claim of many homosexuals.

Can we agree that religion and sexuality are both ways in which people act according to some ideation they have at the level of mind? Or brain if you prefer? At the very least we can agree that a man putting on a hat and deciding to go to Church or a man getting dressed up to go to a gay club are ‘behaviours’, as is almost everything we are seen to do, from expressing our ideas in books to the way we look after our personal hygiene.

Some behaviours are dangerous, or proscribed by society and the state or are approved of and sanctioned by them. Even some dangerous behaviours, like spelunking or joining the army and entering combat, are sanctioned or even encouraged by the law or state.

Can we criticise all, some, or no behaviours? Clearly everyone has some system (legal/religious/moral) by which certain behaviours are either labelled as bad or immoral (religion) or labelled bad and punished (religion/nation states/legal systems) or punished with being labelled bad (modern legal systems). For example, if I commit adultery, it nowhere in most systems of secular law says this is an immoral act or that I am bad, but I may be punished with a punitive divorce settlement. So without doubt, in every and all societies, some behaviours, even if it is just incest or cannibalism or murder, are seen as bad, criticised or even punished. This is uncontroversial.

So this leads us to the question that since some behaviours are criticised, are there any which are above criticism or are sacrosanct and on what basis do we decide this?

What I am getting at, is that do we as a society think that criticising, say, homosexual behaviour or something like patriotism is beyond the pale? Is it completely unacceptable? Is criticising religious behaviour the same?

As a society, we fully endorse and allow criticism of religion in the exact same terms that we allow criticism of murder or rape: Christopher Hitchens compares religious believers with the plague-carrying rats in Albert Camus’s novel ‘The Plague’. ‘If I could wave a magic wand and get rid of either rape or religion’, Harris explains, ‘I would not hesitate to get rid of religion.’

So the recently deceased Hitchen’s reason for lambasting the behaviour known as ‘religion’ is that he must speak out against it since it is worse than rape. No doubt he will argue that religion leads to rape or worse, murder etc. He also says that it is licit to wipe out religious behaviour completely and without the consent or consultation of anyone (i.e by the supra – fascist process of waving a wand and unilaterally getting rid of it and imposing the absence of religion on everyone. Because you want to) and we allow this and very rarely has anyone apart from religious people said that he should not be allowed to say such things, not be allowed to address universities, public gatherings, children, translate books or that he is preaching hatred or is an extremist.

In fact, to show the approval of criticising behaviours, we as a society have allowed people to even criticise the mere holding of ideas, even if they do not actualise as behaviours, in exactly the same way. Hence we have the spectre of Hitchen’s sadly still respiring colleague Sam Harris stating that perhaps some people should be put to death for holding sufficiently dangerous ideas (1). Who decides what is and is not such a dangerous idea is never made clear (perhaps we should have killed Einstein for thinking up the ideas that led to the Nuclear Bomb?). Nor is it ever clarified how exactly we go about killing an idea.

The societal consensus of modern Western Civilization is that this discourse is licit and in fact may even be necessary or true, and therefore should be giving not only free reign but perhaps even preference.

It is also licit, as the economy worsens and the Far Right rises through Europe to extradite gypsies, and blame immigrants for changing the face of society.

Some ethnic and sexual minorities which were traditionally persecuted (Jews, women and homosexuals) have been ‘rehabilitated’ and are now ‘no-go’ areas whose practitioners and members reach ‘God-like’ levels infallibility and any criticism of their behaviour is almost reflexly anti-semetic, sexist or homophobic, as opposed to ‘understandable’ criticism of behaviour or ideas, like, you know, Hitchens or Harris. Interestingly, these persecuted minorities have been replaced by others (immigrants, gypsies, Muslims) much like how slavery ‘coincidentally’ ended around the same time as the Industrial Revolution. You know, given that the fact that you could now mechanise industries where you previously needed to have slaves to make them profitable had nothing to do with the fact that we realised that slavery was bad, like, all of a sudden.

Recently we have had a hue and cry surrounding a Muslim University Professors’ criticism of homosexual behaviour as unnatural, immoral and a perversion. We have seen rabid cries for his removal, for him to be shunned.

But since we don’t have an approved list of behaviours which we can and cannot criticise (*apart from committing or inciting bodily harm or Holocaust denial) and it seems alright to talk about immigrants and religious believers in terms which would make a Nazi blush as above, how was the lecturer in question to know that homosexual behaviour, unlike religious behaviour, was ring-fenced and agreed to be above criticism? After all, the vast majority of people have believed in and practised homosexual acts throughout history, homosexual acts fed the sick, comforted the poor, built empires…oh hang on, wait. What I mean was it is fine to brutally assault the feelings, achievements and beliefs of the majority of humanity today and of the past and compare them to vermin and cast them as a disease and stain upon civilization, but doing that to homosexuals would be wrong right? Because…

Lets imagine that Winter had spoken of homosexual behaviour in the way the aforementioned spoke of believers, Muslims, immigrants, for example in the bold parts of the text:

‘I would not hesitate to rid the world of gays. If I could get rid of all of them by waving a magic wand I would do so. Being gay is responsible for so many rapes. In fact, it’s worse than rape cos the main thing that causes men to rape each other or anally rape women is being gay. In fact, holding the idea that homosexual behaviour is better than heterosexual behaviour could destabilise society so badly and cause the fabric of civilization to change so much that even holding such an idea deserves to be dealt with by imprisonment.  Also, lets face it, in the last ten years, gays have completely changed the face of Britain, we can;’t even recognise it as the same country. Gays have moved in next door and keep to their own community but try to chat up our poor straight boys. They are listening to their happy music all day long and always having their weird ‘festivals’. In a few years, there may not even be any straight people left in this area.

Also, I don’t mind if they are gay, but why do they have to dress like that in public? Why don’t they dress like ‘normal’ people? I don’t want then shoving their gay-ness in my face with their weird dress code and tight tops. In fact, I think they should just all go and move somewhere else.

By the way, I am not saying all gay people rape men, but all people who rape men are gay (not all Muslims are terrorists but…). The gay community needs to speak out against male rape and HIV and that stuff. Why don’t they condemn it when it happens? I think after stuff like that happens, gay groups should not be allowed to hang up those rainbow flags in that area, out of respect for the victims. And, I didn’t want to bring this up, but they do all want to bring the age of consent down to twelve like it is in Spain. Because some of the believe in underage sex. Look at Holland. I’m sorry, but having sex with a twelve year old makes you a paedophile. What else do you call it?’

The above comments are disgusting and reprehensible, and were someone to make them for real, then that person should be locked up.

The only problem is, all of those comments have been made for real, about Muslims and immigrants, just as they were made about Jews, women and homosexuals in the past. Let’s face facts, if people talked about Homosexuals or Jews or ‘blacks’ the way they speak about immigration or Muslims they would get locked up, as they say in London, ‘one time’. And the hideous diatribe above, terrible though it is, is merely replacing ‘Muslims’ with ‘gays’.

What the Gay Lobby and Zionist groups as well as militant secularists and atheists need to realise is we can have a total free for all where we talk to each other like the Third Reich or we can respect behaviours and critique them in a civilised manner. We can’t have a selective free for all where anything goes on a particular target that happens to be vulnerable at the moment while using ‘protected’ minorities (for now) like homosexuals to show that we aren’t bigots since they’re ‘all-right’, it’s just the Muslims and gypsies that are the problem. Because that is how fascists act. Hitler wasn’t any less of a racist because he had an alliance with the Japanese (or decidedly non-Aryan Italians for that matter). And being ‘nice’ to gays does not mean that people like Harris can use the same language which was used to attack them in the past on the scapegoat of the week. And if we allow this kind of discourse to go on, then all groups will only have themselves to blame when their behaviour is attacked in the same terms that Muslims is. It will be largely their fault for allowing such an ill disciplined discourse in the first place

In short, we need to behave ourselves.

(1) ‘Some propositions are so dangerous that it may even be ethical to kill people for believing them’ Sam Harris, The End Of Faith: Religion, Terror and The Future of Reason p52-53

1 Response to Behave Yourselves! The Crimes Of Tim Winter And The ‘New Atheists’ Compared