Posted on January 1, 2013 by thesultansjester 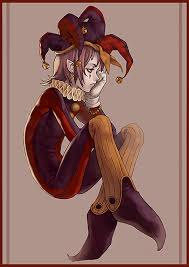 I must say, this is a strange new world with strange new angsts. This poor fellow seems to regret his lot in life though he does seem to fancy himself something of a poet. I wish I knew who he was, I would soon cheer him up as I would do the Sultan and ladies of the court. Oh to hear their musical laughter again! The women speak so harshly nowadays. Would that I had slept on…

I was standing in the corridor of the A&E department of the hospital where I worked as a porter. As usual I and my friend were on work – avoidance. Disillusioned and fed up, this was our favourite pastime. The two of us had gone after the morning ward round at eight to give an x-ray request. Obviously, it does not take two men to hand in a piece of paper. It was not a two – man job. In fact it was a no – man job, as in what the **** was the point of making a guy walk half a mile to the x – ray department to hand in a piece of paper? Had these dickless idiots not heard of faxes? Or e-mails? Or perhaps phones? No one minds doing a bit of unworthy dog – work now and again, but it seemed to me that my entire professional life consisted exclusively of this kind of crap. Hence I suppose the work avoidance.

As I stood enthusiastically watching my Italian colleague handing in a piece of paper to a disinterested radiographer with an unnecessary explanation (no doubt designed to magnify our work avoidance), I saw an old Muslim man on a hospital trolley outside the x – ray room where we stood. He was wearing a long shirt with white cotton pants and had a long white beard to match his white hair. He looked like he was dying. Next to him stood a sturdy young Asian. The man reached out his hand imploringly and the man, who I somehow knew had to be his son, took it. He said nothing, the imploring was done by the cast of his face and the way he moved his hand. I could not fathom to what he implored his son but the young man seemed to understand. I imagined that it was some kind of apology by the old man to his son for injustices which now seemed insignificant. What struck me however was that I thought ‘This will be my father soon’, in the place of the old man, frail weak and helpless, raising his hand to somehow borrow my strength. But then I thought, more accurately, ‘Soon it will be me in the place of the old man’, and this gave me pause for thought. Then I went back to avoiding work. We were extremely good at it, and I believe that my friend and I avoided work successfully for the rest of the day.

However, the avoidance of work did not give me the pleasure that it should, for I was profoundly miserable. Having had plenty of time to reflect on my misery during such taxing activities as taking pieces of paper from one part of the hospital to another (if anything requires three years in university, surely it’s this), I put it down to the fact that I  didn’t have a family of my own, although it would be false to say that I retained such lofty thoughts; in fact I was probably now willing to say that I was miserable because I had no girlfriend or simply had not been laid. But what troubled me was that why should this be such an all encompassing catastrophe for me? After all, there were others who functioned reasonably well as thirty year old pseudo –  eunuchs.

I realised that probably to destroy a man you have to make him believe he is the opposite of what he aspires to. Unlike most dickless wasters, I never took any interest in cars or boasting about jobs and money. I always considered them to be amongst the most pathetic of men, because they were try to fill with fame, status and above all materialism a gap in their soul. They substituted these for what a man really should be doing; the two Fs; Fighting and F***ing.

That probably makes me sound like a violent and licentious individual. In fact, I was a thirty years old, deliberately abstinent and had not thrashed anyone for quite some time.

Yet, from a very early age I had been fascinated with the excellent design of women. How they had been created in myriad different forms, where the slightest variation in the shape of the eye or the line of the brow produced an entirely different yet attractive outcome. This was endlessly fascinating. There was no obvious upper limit to how beautiful they could be; no one of them could overwhelm the others. To me they were doubtless the ultimate proof of the divine design of the universe, otherwise how could something so sublime and perfect exist? Chance alone was a poor craftsman for such as they.

So to me, the only thing in life really worth hankering after and chasing was women. Nothing in nature was as attractive as this slight variation on my very own design. Yet strangely, throughout my life, this love and single-minded adoration did not lead me to perversion. I was able to contemplate and believe in monogamy and romantic love. It also did not seem to handicap me when I was around women; I was able to talk with them and mock them with ease, sometimes toying mercilessly with the very objects of my obsession.

Oddly, it never occurred to me until much later in my youth that they might regard me with the same hunger and obsession, and I regarded their motives as inscrutable.

1 Response to My Hideous Suffering